He is a Belgian globe trotter artist… from Brussels to Saint-Barth via Cannes, Christian Lange has lived several lives. Press agent, journalist and then photographer, he then discovered that he had a great talent for graphic creations, compositions that weave images and computers, to make colorful films that we watch with greed and get rid of chromatic powders by shaking our heads after seeing and reviewing them.His technique is constantly being refined and recently he has marked his career with a series of very contemporary but inspired works that form a kind of first synthesis, a bit like graphic sampling, reminiscent of the DJs’ sampling work: Paréidolies. Key images, often portraits of universal icons, with dreamlike and precise backgrounds, diabolically precise… In his mind at least René Magritte is an inspiration for the artist’s work. That’s why his portrait is important in the series. Surrealism is found there through the brightly coloured backgrounds, in which everyone will find something different, even if real elements will be unanimously accepted…. By looking up to the sky, everyone can see in the shapes of the clouds what their eyes interpret. It’s a bit the same thing and Christian Lange plays with delight at this “not seen not taken” part. The portrait of the former First Lady of France takes its rightful place in this gallery. Carla Bruni, chameleon artist, asserts herself by her deep gaze, a more fleshy part of her person and a hair that could transform her into a Marianne… But if you dive into the background, you’ll go on a detail hunt again. You will see, will not see, will come back to the same place to find something else, even if it means believing that you are losing your mind… Are you right about that? Madonna the lioness, almost merges with the thin panther Marilyn Monroe. Random? Look in his hair, between his fingers, deep in his eyes…. And you’ll see, maybe! This is the magic of Paréidolies. We walk around in this series a little like in the alleys of an Indian market with spice pyramids. It’s like a blind tasting in which our eyes turn into taste buds. Every detail has a flavour, reminds us of something, but we can’t put our finger on it…. And that’s what makes the exercise rich! The same is true here and Christian Lange will never give his recipe… It is not even certain that there is one. Surreal, isn’t it? A New York gallery is also closely monitoring its evolution. What would Magritte have said about this artist’s work outside the box? Maybe just “do I see what I’m 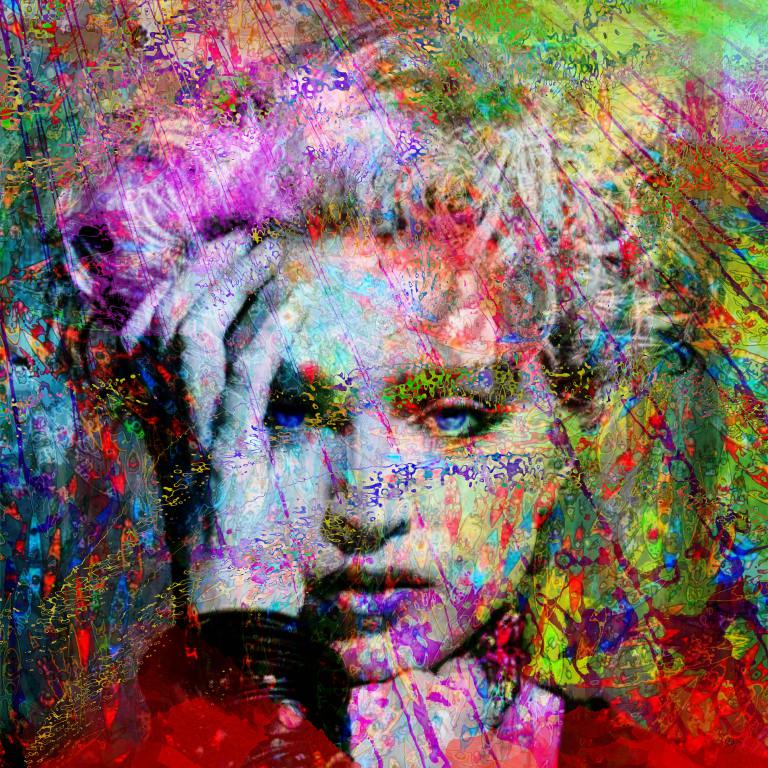